Synaptic dopamine (DA) is mainly regulated by the presynaptic DA transporter (DAT). Single-photon emission computerized tomography (SPECT) with the DAT radiotracer [123I]FP-CIT assesses changes in synaptic DA availability when endogenous DA displaces [123I]FP-CIT or competes for DAT. Here, we investigated the effects of haloperidol (HAL) and clozapine (CLZ) on [123I]FP-CIT binding in the rat striatum and midbrain to assess the utility of [123I]FP-CIT SPECT to quantify changes in synaptic DA availability. Rats underwent [123I]FP-CIT SPECT after intraperitoneal administration of normal saline (vehicle), HAL (1 and 7 mg/kg), CLZ (10 and 54 mg/kg) and bupropion (BUP, a DAT blocker, 20 and 100 mg/kg). In the striatum and midbrain, percent differences in the nondisplaceable binding potential (BPND) of [123I]FP-CIT compared to the vehicle were calculated for the various drugs and doses. In another experiment, changes in endogenous striatal DA concentration were measured by microdialysis under the conditions used in the SPECT study. BUP dose-dependently occupied DAT at considerable levels. Compared to the vehicle, HAL decreased [123I]FP-CIT BPND in the striatum (−25.29% and −2.27% for 1 and 7 mg/kg, respectively) and to a greater degree in the midbrain (−58.74% and −49.64% for 1 and 7 mg/kg, respectively), whereas the CLZ-treated group showed a decrease in the midbrain (−38.60% and −40.38% for 10 and 54 mg/kg, respectively) but an increase in the striatum (18.85% and 38.64% for 10 and 54 mg/kg, respectively). Antipsychotic-induced changes in endogenous striatal DA concentrations varied across drugs and doses. The data demonstrate that [123I]FP-CIT SPECT may be a useful preclinical technique for detecting increases in synaptic DA availability in the midbrain and striatum in response to HAL, with results comparable to those of microdialysis. 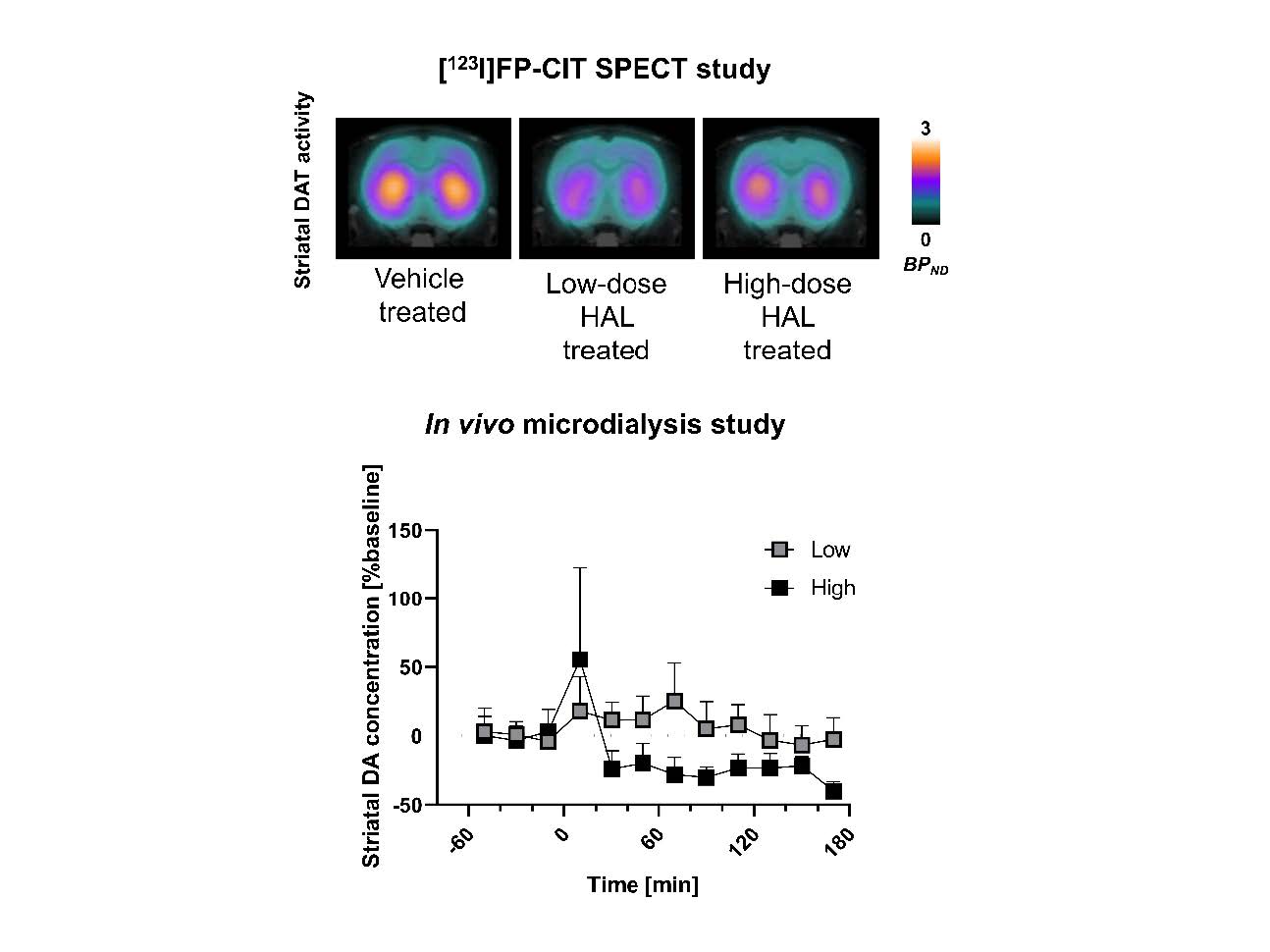