Circadian rhythm is defined as a 24-hour biological oscillation, which persists even without any external cues but also can be re-entrained by various environmental cues. One of the widely accepted circadian rhythm behavioral experiment is measuring the wheel-running activity (WRA) of rodents. However, the price for commercially available WRA recording system is not easily affordable for researchers due to high-cost implementation of sensors for wheel rotation. Here, we developed a cost-effective and comprehensive system for circadian rhythm recording by measuring the house-keeping activities (HKA). We have monitored animal's HKA as electrical signal by simply connecting animal housing cage with a standard analog/digital converter: input to the metal lid and ground to the metal grid floor. We show that acquired electrical signals are combined activities of eating, drinking and natural locomotor behaviors which are well-known indicators of circadian rhythm. Post-processing of measured electrical signals enabled us to draw actogram, which verifies HKA to be reliable circadian rhythm indicator. To provide easy access of HKA recording system for researchers, we have developed user-friendly MATLAB-based software, Circa Analysis. This software provides functions for easy extraction of scalable “touch activity” from raw data files by automating seven steps of post-processing and drawing actograms with highly intuitive user-interface and various options. With our cost-effective HKA circadian rhythm recording system, we have estimated the cost of our system to be less than $150 per channel. We anticipate our system will benefit many researchers who would like to study circadian rhythm. 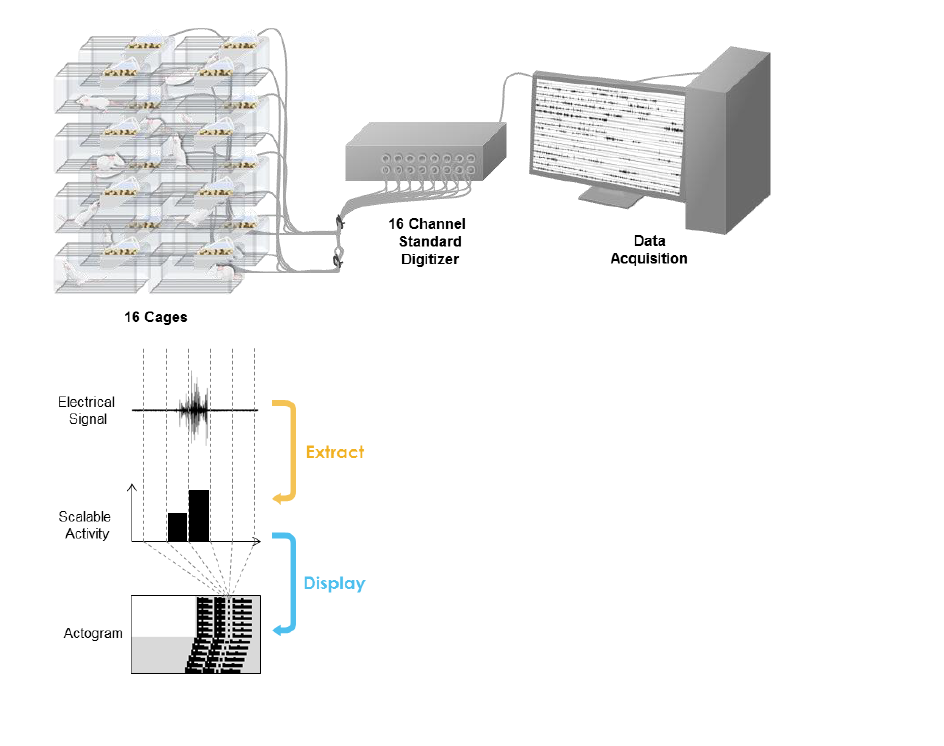 Circadian rhythm is defined as a 24 hour biological rhythm, which persists even without any external cues but also can be re-entrained by various environmental cues [1,2,3]. Accumulating lines of evidence indicate that this biological rhythm is not only important for periodic daily behaviors of organisms, but also critically linked to various forms of pathophysiological processes including metabolism, immunity, neurodegeneration and cognitive function [4,5,6,7]. As a result, there has been a growing need of interdisciplinary research on circadian rhythm and other research areas. However, researchers who are newly getting into the fields of circadian rhythm soon face high cost setup fees for the behavioral experiments. For this reason, reducing financial burden for research equipment can be a good way to accelerate interdisciplinary research on circadian rhythm.

In the field of chronobiology, most circadian rhythm behavioral experiments have been based on animal's locomotor activity [8,9]. For rodents, the most widely accepted method for measuring circadian locomotor activity is wheel-running activity (WRA) recording system. However, cost for commercially available WRA configurations is not easily affordable for many researchers since these instruments come at a cost of tens of thousands of U.S. dollars to hundreds of thousands of U.S. dollars. The factors for high price in commercial WRA configurations could be divided into three categories: 1) custom-developed animal housing environment and cages with running wheel, 2) activity counting/recording devices and monitoring system, 3) high cost commercial analysis software. Since these systems are usually provided as a whole package, there are not many options for consumers to reduce the price.

In addition to high cost, there are also some intrinsic disadvantages of WRA configuration of currently available circadian rhythm recording systems. One of the critical issues on WRA configuration is that the usage of wheel-running behavior itself can alter the animal's endogenous activity patterns, energy balance, food intake, motivation and reward systems, stress, anxiety, depression and even brain structures [10,11,12,13,14,15]. Moreover, when an animal fails to learn wheel-running behaviors or is unable to utilize wheels because of innate motor defects, WRA configuration cannot measure the animal's circadian rhythm. Therefore, measuring the endogenous circadian rhythms with natural locomotor activities, such as drinking/feeding behaviors and sleep/wake cycles would be much more suitable for monitoring animal's inherent circadian rhythm.

There have been several approaches proposed to monitor natural activities, including vibration detecting system [16,17,18], home cage system [16,19,20], beam break system [16], video monitoring system [16,21], RFID recording system [16,22], and piezo-sensor system [23]. While these systems were successful in terms of detecting natural animal behaviors, none of these systems seems to achieve noticeable cost reduction compared to WRA system. In terms of cost, rather simple wheel & wheel-counting sensors are generally cheaper than any of sensors used in the above system. Therefore, currently available systems including WRA system are not capable of recording natural activities at a reasonable cost.

To overcome the issues with currently available systems, we developed a novel circadian rhythm recording system as an alternative option. We provide a novel cost-effective solution for circadian rhythm recording system which monitors natural activities. By simply connecting a metal lid of animal housing cage to an input channel of a standard analog/digital (A/D) converter by copper wire, we were able to record animal's movement when a mouse touches a metal lid while standing on a metal floor (ground), generating an electrical signal. This idea has been previously described as a low-cost solution to detect drinking behavior in mice with various additional advantages [24]. Since animal's food pellets and water bottle are generally placed above the metal lid of a cage, the recorded electrical signals from animal's “touching behavior” can reflect combined house-keeping activities (HKA) of eating, drinking and some of natural locomotor behavior such as grabbing the metal lid, which are all well-known indicators for circadian rhythm. To convert these electrical signals into scalable activity, we have developed MATLAB-based user-friendly software, Circa Analysis. This software is optimized for HKA recording system and can automatically draw actograms. In combination with a novel hardware configuration and optimized software, our system can achieve simultaneous recordings from 16 mice for duration of indefinite time. By eliminating the need for a running-wheel and commercial software, we were able to reduce the cost down to 1/10th of commercial systems.

For several decades, WRA configuration has been the most widely used system for circadian rhythm behavior research. In terms of the equipment price, however, it has been a financial barrier for some researchers. In this study, we present a new circadian rhythm behavior recording system that is easier to operate and more cost-effective than the existing WRA configurations (Fig. 1, Table 1). We have shown the principles of HKA recording system and developed a user-friendly software, Circa Analysis (Fig. 2). Our software provides automatic conversion of electrical signals into scalable touch activities in 6 signal processing steps (Fig. 3). In combination with various light-dark protocols, we have confirmed that the HKA recording system is capable of drawing actograms (Fig. 4) which are similar to those of currently available WRA configurations.

One of the great feature of HKA system is that there is no requirement of specific sensor. Generally, acquisition of data in most systems is mediated by following steps: 1) physical parameter detection (ex. wheel-running), 2) transducer sensor (ex. wheel counter), 3) A/D converter, 4) computer. However, in HKA system, simple A/D converter directly detects animal's natural behavior without any additional devices. The simplicity of data acquisition process is where HKA system has huge benefits over other recording systems that uses specific sensors [16,17,18,19,20,21,22,23].

As a result, this simple hardware composition in HKA configuration brings forth appreciable cost benefits. Since A/D converter not only serves as analogue to digital converter, but also as transducer sensor in HKA system, the complete HKA system can be established at a very low cost which is A/D converter. In this system, the estimated cost for recording circadian rhythm was less than 150$ per animal. If an A/D converter is already available, HKA configuration can be implemented at virtually no cost. Although our current HKA system utilizes a specific model of A/D converter and a recording software provided by a specific company (Molecular device), this can be overcome by replacing the A/D converter with one that can write “.abf” format files. This will allow the A/D converter to be compatible with our software, Circa Analysis. Therefore, future direction of our HKA system is to find a cost-effective A/D converter and develop complementary recording software for software compatibility with Circa Analysis.

HKA recording system is versatile and flexible. One of the great benefits for experimenters is that the maintenance of HKA system is much more convenient compared to WRA configurations because there are no accessories to maintain. Moreover, animals do not require additional habituation period for running-wheel housing cage. Since our system is recording natural house-keeping behaviors such as eating, drinking, and grabbing, there is virtually no possibility of changing animal's biological features caused by strenuous activities such as wheel-running [10,11,12,13,14,15]. Furthermore, HKA configuration is functionally expandable. One can record each animal's grabbing, drinking, and eating behavior separately by isolating the metal lid, metal food container, and metal sipper of water bottle and connecting to separate A/D converter channel to each metal part. Considering the fact that multifunctional metabolic cages cost tens of thousands of U.S. dollars per cage, HKA configuration system could be a great replacement for cost-effective multi-functional HKA recording system.

One of the disadvantages of our HKA configuration is that it is difficult to use any kind of wire-connected head mounting devices, such as fiber optic cables for optogenetics, wires for single unit-recordings and EEG recordings, and plastic tubings for microdialysis. However, this disadvantage applies equally to the WRA configurations. Using wireless devices could be a simple solution for this problem.

Fig. 1. Experimental design of HKA recording system. (A) Actual setup of house-keeping recording system with animal in distributional housing cage (left) and enlarged view of metal sipper tube in metal contact with metal lid (right). (B) Metal contact acts as a bridge to detect drinking behavior through the metal lid. (C) Type of characteristic behaviors which generate electrical conductance: grabbing, drinking and eating. (D) Type of characteristic behaviors which do not generate a conductance: hanging, crawling and sleeping.

Table. 1. Comparison of required components between WRA and HKA configurations