Recently, we reported that astrocytes in the trigeminal caudal nucleus (Vc) of the brain stem express a purinergic receptor P2X3, which is involved in the craniofacial pathologic pain. Although we observed protein expression of P2X3 receptors (P2X3 Rs) in the astrocyte of the Vc, it is still unclear that astrocyte has functional P2X3Rs in Vc. To address this issue, we recorded asrtocytic P2X3Rs by using whole cell voltage-clamp recording in the Vc of the GFAP-GFP mice, which was used as a guide to astrocytes with green fluorescence. While measuring voltage ramp-induced astrocytic membrane current, we found the amplitude of the current was increased when we applied P2-purinoreceptor agonist, α,β-meATP. This increase was blocked by co-application of A317491, P2X3R antagonist. These results demonstrate that astrocytes in the Vc express functional P2X3Rs, which might be critical in craniofacial pathologic pain. 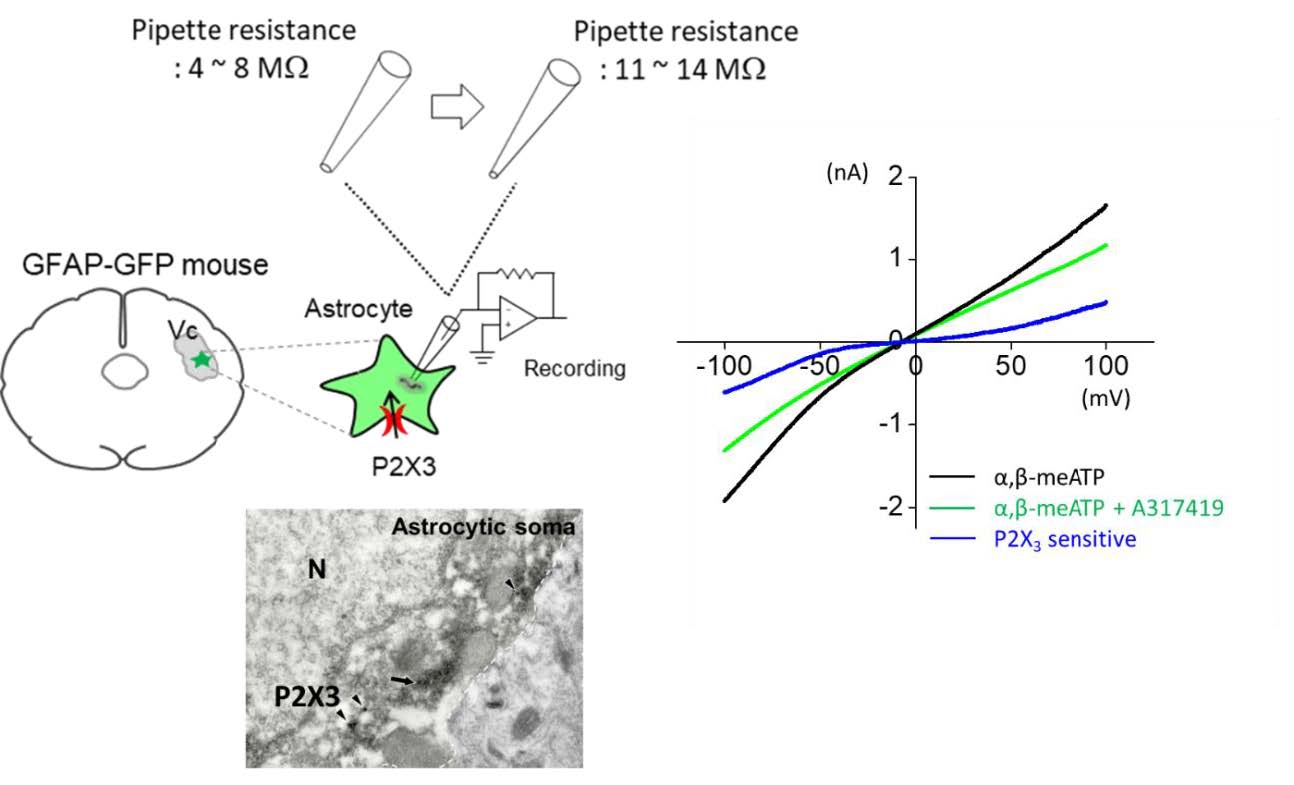 P2X receptor family consists of cation-permeable ligand-gated ion channels that open in response to the binding of extracellular adenosine 5′-triphosphate (ATP). P2X receptors are present in a diverse array of organisms in mice and humans [1]. ATP released from damaged or inflamed tissues can act at P2X receptors expressed on primary afferent neurons [2,3,4]. The resulting depolarization can initiate action potentials that are interpreted centrally as pain. Among those receptors, P2X3 is sensitive to ATP which is released during tissue injury and has a critical role in peripheral pain response as well as in several signaling pathways involving neuron-glia interaction. [5,6,7]. Astrocytes are implicated in pathological pain associated with nerve injury and inflammation [8,9,10,11]. Recently, we reported that 1) astrocytes express P2X3 receptor (P2X3R) in the trigeminal caudal nucleus (Vc), which is a first relay nucleus for the craniofacial nociception in the brain stem and implicated in the neuropathic pain and that 2) the density of astrocytic P2X3R in the Vc is increased following chronic constriction injury of infraorbital nerve (CCI-ION). These findings suggest that astrocytic P2X3R-mediated mechanism is involved in the craniofacial neuropathic pain signaling [12]. Although these findings strongly imply astrocytic P2X3R-involved mechanism in the neuropathic pain, there is a lack of direct evidence for functional P2X3R in the Vc.

To address this issue, we investigated the activity of P2X3R in astrocytes in the Vc using whole cell voltage-clamp recordings while applying voltage ramp protocol. In this study, we report, for the first time, a functional expression of P2X3R in the astrocyte of the Vc, which may be involved in the regulation of neuronal activity in pathologic pain condition.

To test whether the P2X3Rs in the astrocytes in the Vc are functional, we performed whole cell patch clamp recordings from Vc slices. The soma of the astrocytes in the Vc (trigeminal astrocytes) were relatively smaller (approximately 7~8 µm of diameter of soma) than that of hippocampal astrocytes when we measured soma area of double positive cells with GFAP and S100β antibodies, both of which are astrocytic marker in CNS (area of soma, size of pixel on S100β signals, µm2: hippocampal astrocyte, 78.41±6.71, n=10; trigeminal astrocyte, 30.30±0.97, n=15; p<0.001, Fig. 2A and 2B). This physical aspect of Vc astrocytes prompted us to use GFAP-GFP mice (mice overexpressing green fluorescent protein under the control of astrocyte-specific GFAP promoter) to visually identify astrocytes in acutely prepared slices. Simultaneously, to enhance chance for tight seal, we used recording electrode with higher pipette resistance (11~14 MΩ) compared with conventional recording electrode (pipette resistance is 4~8 MΩ, which would be ≈ 2 µm pore size of glass electrode). Visual guidance with GFP and smaller tip size of electrode allowed us to identify and successfully whole-cell patch-clamp the astrocytes in Vc (Fig. 3A). To observe ATP-mediated astrocytic current, we monitored the change of membrane conductance stimulated by a periodic voltage ramps from +100 mV to −100 mV and examined both the amplitude of ramp-currents and reversal potentials to verify that recorded-current is mediated by purinergic receptor activity (Fig. 3B). During recordings from astrocyte in the Vc, we found that application of a P2X agonist, α,β-meATP (M6517, Sigma, USA), increased the membrane conductance, and that this effect was blocked by coapplication of A317491 (A2979, Sigma, USA), a P2X3 specific antagonist (Fig. 3B and 3C, black and green line). Application of α,β-meATP induced not only increase of amplitude of ramp current, but also induced slow inward current during recordings which was partially blocked by co-application of A-317491 (Fig. 3B). The voltage dependence of P2X3-mediated current was determined by subtracting ramp current traces recorded during co-application of α,β-meATP and A-317491 from those recorded during application of α,β-meATP only (Fig. 3C, blue line). The reversal potential of the P2X3-mediated current fell at around 0 mV, which is consistent with a current mediated by a nonselective cation channel. Summary bar graph showed that application of α,β-meATP increased current density of ramp current in astrocyte and its increase was almost completely blocked by A-317491 (average of pA/pF at maximal peak: Control 29.74±3.75; α,β-meATP, 46.65±5.79; α,β-meATP+A-317491, 32.57±5.28; n=9; p=0.0227 , Control vs α,β-meATP; p=0.0029, α,β-meATP vs α,β-meATP+A-317491, paired sample t-test, Fig. 3D). These results indicate that astrocytes in the Vc express functional purinergic receptors, including P2X3Rs.

In conclusion, we demonstrate for the first time that astrocytes in the Vc express a functional P2X3Rs using whole-cell voltage-clamp recording from trigeminal astrocytes. Together with our previous report that P2X3Rs are upregulated in the fine astrocytic process following CCI-ION [12], this result strongly suggests the existence of astrocytic P2X3R-mediated mechanism for craniofacial neuropathic pain which was initially attributed to neuronal P2X3R on pain sensation. Future investigations on the astrocytic P2X3R-meidated mechanism for the modulation of the primary nociceptive neurons and their postsynatic neurons in the Vc will be needed.

Fig. 3. P2X3 mediated whole cell current was recorded from astrocytes in Vc. (A) Schematic diagram of experimental design for recording astrocyte in Vc. (B) Time course of consecutive ramp current from astrocyte in Vc with application of αβ-meATP and A317491. Lower panel shows representative trace of ramp current baseline, αβ-meATP and A317491 application. Inserted box in below indicates ramp protocol. (C) Representative trace of ramp current from trigeminal astrocyte during application of αβ-meATP (black) and αβ-meATP+A317491 (green). Blue line indicated P2X3R sensitive current (subtracted from αβ-meATP to αβ-meATP+A317491). (D) Summary bar graph for current density of ramp currents at each condition, * and ** indicate p<0.05 and p<0.01 respectively, by paired-sample t-test.