Stimulation of the medial forebrain bundle (MFB) can reinforce intracranial self-stimulation (ICSS) in rodents (i.e., reward-seeking behavior). The MFB stimulation produces a highly reliable behavioral output that enabled a clear distinction of the animal behavioral states between the non-ICSS and ICSS periods. However, the cortical states during these reward-seeking behaviors are not fully characterized in comparison to those during volitional behavior. This study was designed to characterize the cortical rhythms of and coherence between prefrontal cortex and hippocampus during the wheel-turning behavior reinforced by the ICSS in comparison to the wheel-turning without ICSS. We used a wheel for freely moving mice, which was programmed to deliver cathode currents through an electrode in the MFB at each one-quarter turn of the wheel to induce ICSS. The wheel-turning epochs were extracted from the pre-ICSS, ICSS and post-ICSS sessions and the prefrontal EEGs and the hippocampal LFPs in the epochs were analyzed with power and synchronization analyses. During the ICSS, the EEG power decreased at 6~10 Hz in the prefrontal cortex, while was not significantly altered in the hippocampus. Furthermore, we found that the phase synchrony between the prefrontal cortex and the hippocampus corresponding to information transmission between the two regions during reward-seeking motion decreased preceding MFB stimulation reinforced by ICSS. Our findings suggest that theta-activity can be reliably dissociated from active behavior if the animal is involved in self-stimulation. 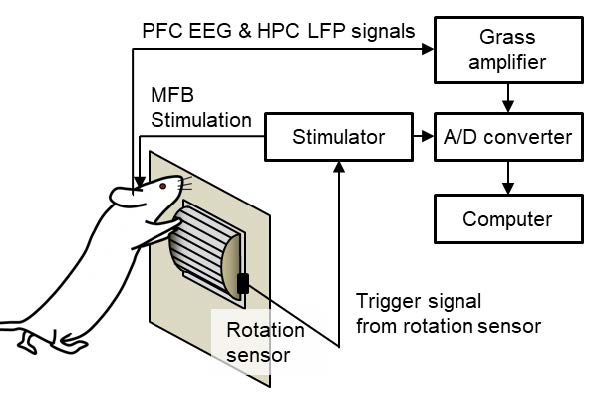 Intracranial self-stimulation (ICSS) is a paradigm in which animals self-administer rewarding brain stimulation through electrodes implanted in reward circuits. The use of ICSS has been practical, particularly in rodents mainly due to their operant ICSS behavior [1,2]. However, cortical activities, particularly during reward-seeking behavior, have not been fully analyzed compared to stereotypic patterns during the same but volitional behavior. Typically, a wheel is used for the facilitation of ICSS behavior in mice, and a lever is used in rodents [3]. Although most of the observations were made during learning situations, one of the typical brain activities observed during wheel turning is hippocampal activity [4].

In the hippocampus, theta oscillations in the frequency range of 6~10 Hz present during active motor behavior, such as locomotion and exploration [5]. It has been known that sensorimotor integration is associated with theta rhythms [6]; in some studies, however, context, rather than motion, has been suggested as being more critical to the generation of theta rhythms. For example, van Lier and his colleagues found that hippocampal theta power was different between voluntary and automatic motions and showed that the non-motor process might involve theta rhythms [7]. In addition, Wyble and his colleagues showed that hippocampal theta power was dependent on the expectation of reward, even in the case of the same behaviors [8].

In regard to reward-seeking behaviors, the prefrontal cortex is known to be critically involved [9,10], and its connectivity to subcortical structures, such as the ventral striatum and midline thalamus, is known to contribute to reward-seeking behaviors [11,12,13]. While it seems reasonable that the association of a certain behavior to a reward requires learning and memory, in which hippocampus plays an essential role, there is still a lack of understanding of how hippocampal theta oscillations and hippocampal-prefrontal interaction are affected by motivational states.

To investigate the involvement of hippocampal and prefrontal theta rhythms in motivational behavior, we induced a reward-seeking wheel-turning behavior in mice by using ICSS of the medial forebrain bundle (MFB), which is a part of the reward system and has been proven to be an effective operant reinforcer. Local field potential (LFP) and electroencephalogram (EEG) data were acquired from the dorsal hippocampus (HPC) and the prefrontal cortex (PFC), respectively, and theta band power during the wheel-turning activities were compared between a motivated condition (with ICSS) and a normal condition (without ICSS). HPC-PFC interactions during the wheel-turning behavior were characterized by a phase synchronization index as well.

We have shown that the theta rhythms behind the seemingly equivalent behavior of wheel-turning can be different depending on the behavior state during ICSS paradigm in mice. By using the ICSS paradigm, which starts to deliver the stimulation current 0.5 s after the onset of wheel-turning activity, we could compare the electrophysiological features of an equivalent and simple stimulus-free behavior between a reward-seeking condition and in a volitionally behaving condition. When the mice turn the wheel without any reward, the theta rhythms were consistently present before and after the wheel-turning activity in both the PFC and the HPC. On the other hand, theta power during the ICSS session showed an event-related desynchronization in PFC.

The reduction in theta rhythms we observed in this study might indicate that the wheel-turning behavior became automatic or consummatory by ICSS. Since the theta rhythms are known to appear with active motor behavior, at a glance, it seems contrary to the typical pattern that the theta rhythms decreased during the ICSS session where the mice turned the wheel very actively. However, researchers have also found that the regular theta rhythms are associated with the control of voluntary movement [15], and the brain oscillations become irregular when the animals perform automatic behaviors such as grooming, chewing and licking [5,16]. Compared to consummatory behaviors, which pursue the satisfaction of innate drive, the sequence of movements that compose voluntary behaviors is not fixed, thus, involving a more complex neural circuit [5]. It is also known that the two types of hippocampal oscillations associated with different types of behaviors have distinct cellular correlates; granule cells in the dentate gyrus discharge the most during exploratory and voluntary behaviors, while pyramidal neurons in the CA fields are maximally active during consummatory behaviors [17]. ICSS might simplify the circuit involved in wheel-turning activity (which is exploratory in nature ) and the change in neural activities would be reflected in EEG and LFP.

The change in the phase synchrony between the PFC and the HPC during the ICSS session also supports a possible change in the neural circuit related to the wheel-turning behavior. The PFC and the dorsal HPC communicate to each other either directly or indirectly through nucleus reuniens during memory processes [18], and it has been reported that the level of theta synchronization is associated with encoding [19] and retrieval [20] of memories. Decreased synchronization reflects reduced information transmission between the PFC and the HPC, possibly indicating a change in the memory retrieval process during automatic behavior.

Our study was limited to investigating only a part of reward circuitry but was still able to show that the motion-related theta rhythms in the PFC and the HPC could be modulated with the motivational states induced by ICSS. Extended research incorporating other regions, such as the ventral tegmental area and the nucleus accumbens, might broaden the circuit-level understanding of reward-seeking behaviors.

Fig. 1. Experimental setup and histological verification of the stimulation site. (A) Experimental setup for ICSS. A mouse was positioned in a custom-made stimulation chamber with free access to a wheel. When the mouse turned the wheel by 1/4 of a rotation, a trigger signal from a rotation sensor was sent to both a pulse stimulator and an analog-to-digital (A/D) converter. The pulse stimulator gave the electrical stimulation to the MFB following a protocol arranged in the stimulator. Prefrontal EEG and hippocampal LFP data were acquired by an analog amplifier, digitalized at 500 Hz and recorded by a computer. (B) Histological verification of the tip of the stimulating electrode. CM, central medial thalamic nucleus; ic, internal capsule; mt, mammillothalamic tract; mfb, medial forebrain bundle; 3v, third ventricle.

Fig. 2. Theta power modulation by ICSS. (A) Average trace of the wheel-turning activity of six mice. Dotted vertical lines indicate the onset (time=0) and the cessation (time=10) of the MFB stimulation. Gray shades for SEM. (B) Mean duration of the wheel-turning activity. *for p<0.05, repeated measures ANOVA and post hoc comparison with the Tukey-Kramer method. Error bars for SEM. (C, E) Average spectrograms of the PFC EEG and HPC LFP data. (D, F) Average power spectral density during the pre-ICSS, the ICSS and the post-ICSS sessions in the PFC and the HPC, respectively. Gray shades indicate the frequency range of the theta rhythm (6~10 Hz), where a significant difference was found in the PFC between the pre-ICSS and ICSS sessions. *for p<0.05, Wilcoxon signed rank test. Error bars for SEM. (G) Representative traces of the raw signals and corresponding theta-filtered signals for the PFC EEG and the HPC LFP data. Scale of the EEG and LFP data were matched by normalization.

Fig. 3. Theta power modulation during the wheel-turning activity. (A) Average wavelet spectrogram around the onset of wheel-turning activity for the PFC (left) and the HPC (right). Dotted vertical lines at time 0 indicate the onset. For the ICSS session in the second row, the onset of the MFB stimulation is also marked with dotted vertical lines. (B) Theta power in the time bins I~III. *for p<0.05, Wilcoxon signed rank test. Error bars for SEM.

Fig. 4. Modulation of the theta synchronization between the PFC and the HPC. (A) Average PSI between the PFC and the HPC calculated at each timepoint of the wheel-turning epoch. Error bars for SEM. Dotted vertical lines at time 0 and time 0.5 indicate the onset of wheel-turning activity and the onset of MFB stimulation, respectively. Green and gray shades indicate the intervals in which the PSIs in the ICSS session deviated from the pre-ICSS sessions before and after the stimulation onset, respectively. (B) Mean PSIs in the interval from 0.4 to 0.5 s. Error bars for SEM. (C) Mean PSIs in the interval 0.5 to 0.7 s. *for p<0.05, repeated measures ANOVA and post hoc comparison with the Tukey-Kramer method.