Memantine is a non-competitive N-methyl-D-aspartate receptor (NMDAR) antagonist clinically approved for moderate-to-severe Alzheimer's disease (AD) to improve cognitive functions. There is no report about the proteomic alterations induced by memantine in AD mouse model yet. In this study, we investigated the protein profiles in the hippocampus and the cerebral cortex of AD-related transgenic mouse model (3×Tg-AD) treated with memantine. Mice (8-month) were treated with memantine (5 mg/kg/bid) for 4 months followed by behavioral and molecular evaluation. Using step-down passive avoidance (SDA) test, novel object recognition (NOR) test and Morris water maze (MWM) test, it was observed that memantine significantly improved learning and memory retention in 3xTg-AD mice. By using quantitative proteomic analysis, 3301 and 3140 proteins in the hippocampus and the cerebral cortex respectively were identified to be associated with AD abnormalities. In the hippocampus, memantine significantly altered the expression levels of 233 proteins, among which PCNT, ATAXIN2, TNIK, and NOL3 were up-regulated, and FLNA, MARK 2 and BRAF were down-regulated. In the cerebral cortex, memantine significantly altered the expression levels of 342 proteins, among which PCNT, PMPCB, CRK, and MBP were up-regulated, and DNM2, BRAF, TAGLN 2 and FRY1 were down-regulated. Further analysis with bioinformatics showed that memantine modulated biological pathways associated with cytoskeleton and ErbB signaling in the hippocampus, and modulated biological pathways associated with axon guidance, ribosome, cytoskeleton, calcium and MAPK signaling in the cerebral cortex. Our data indicate that memantine induces higher levels of proteomic alterations in the cerebral cortex than in the hippocampus, suggesting memantine affects various brain regions in different manners. Our study provides a novel view on the complexity of protein responses induced by memantine in the brain of AD. 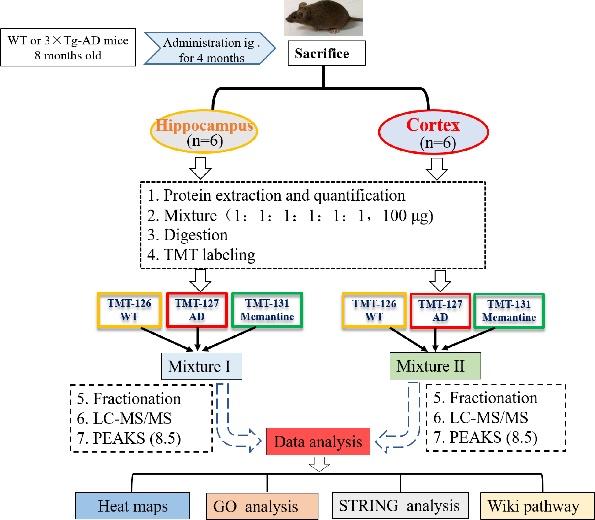