Currently, compared to jaw-closing (JC) α-motoneurons, the information on the distribution and morphology of glutamatergic synapses on the jaw-closing (JC) γ-motoneurons, which may help elucidate the mechanism of isometric contraction of the JC muscle, is very limited. This study investigated the distribution and ultrastructural features of vesicular glutamate transporter 1 (VGLUT1)- and VGLUT2-immunopositive (+) axon terminals (boutons) on JC γ-motoneurons by retrograde tracing with horseradish peroxidase, electron microscopic immunocytochemistry, and quantitative analysis. About 35% of the boutons on identified JC γ-motoneurons were VGLUT+, and of those, 99% were VGLUT2+. The fraction of VGLUT1+ boutons of all boutons and the percentage of membrane of JC γ-motoneurons covered by these boutons were significantly lower than those for the JC α-motoneurons, revealed in our previous work. The bouton volume, mitochondrial volume, and active zone area of the VGLUT2+ boutons on the JC γ-motoneurons were uniformly small. These findings suggest that the JC γ-motoneurons, in contrast to the JC α-motoneurons, receive generally weak glutamatergic synaptic input almost exclusively from VGLUT2+ premotoneurons that form direct synapse with motoneurons. 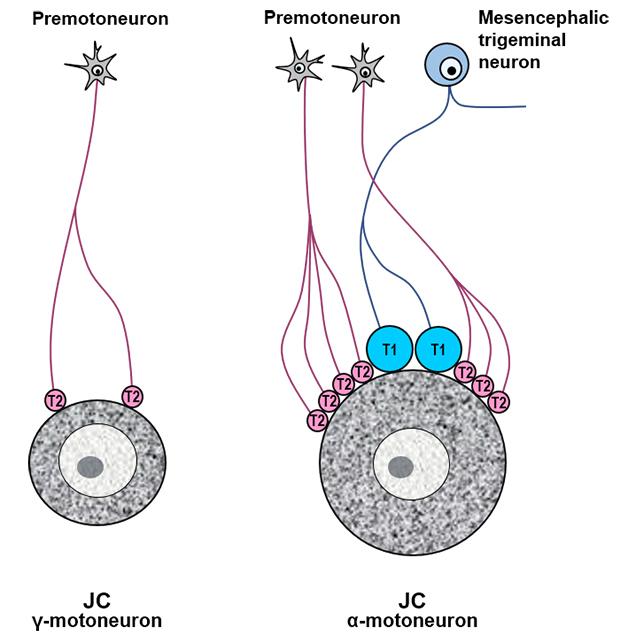