Absence seizures (AS) are generalized non-convulsive seizures characterized by a brief loss of consciousness and spike-and-wave discharges (SWD) in an electroencephalogram (EEG). A number of animal models have been developed to explain the mechanisms of AS, and thalamo-cortical networks are considered to be involved. However, the cortical foci have not been well described in mouse models of AS. This study aims to use a high density EEG in pathophysiologically different AS models to compare the spatiotemporal patterns of SWDs. We used two AS models: a pharmacologically induced model (gamma-hydroxybutyric acid, GHB model) and a transgenic model (phospholipase beta4 knock-out, PLCβ4 model). The occurrences of SWDs were confirmed by thalamic recordings. The topographical analysis of SWDs showed that the onset and propagation patterns were markedly distinguishable between the two models. In the PLCβ4 model, the foci were located within the somatosensory cortex followed by propagation to the frontal cortex, whereas in the GHB model, a majority of SWDs was initiated in the prefrontal cortex followed by propagation to the posterior cortex. In addition, in the GHB model, foci were also observed in other cortical areas. This observation indicates that different cortical networks are involved in the generation of SWDs across the two models. 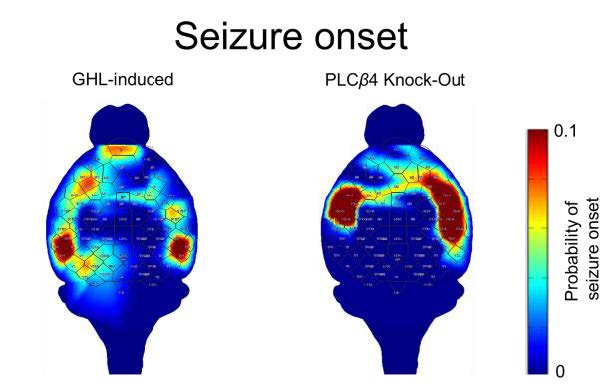